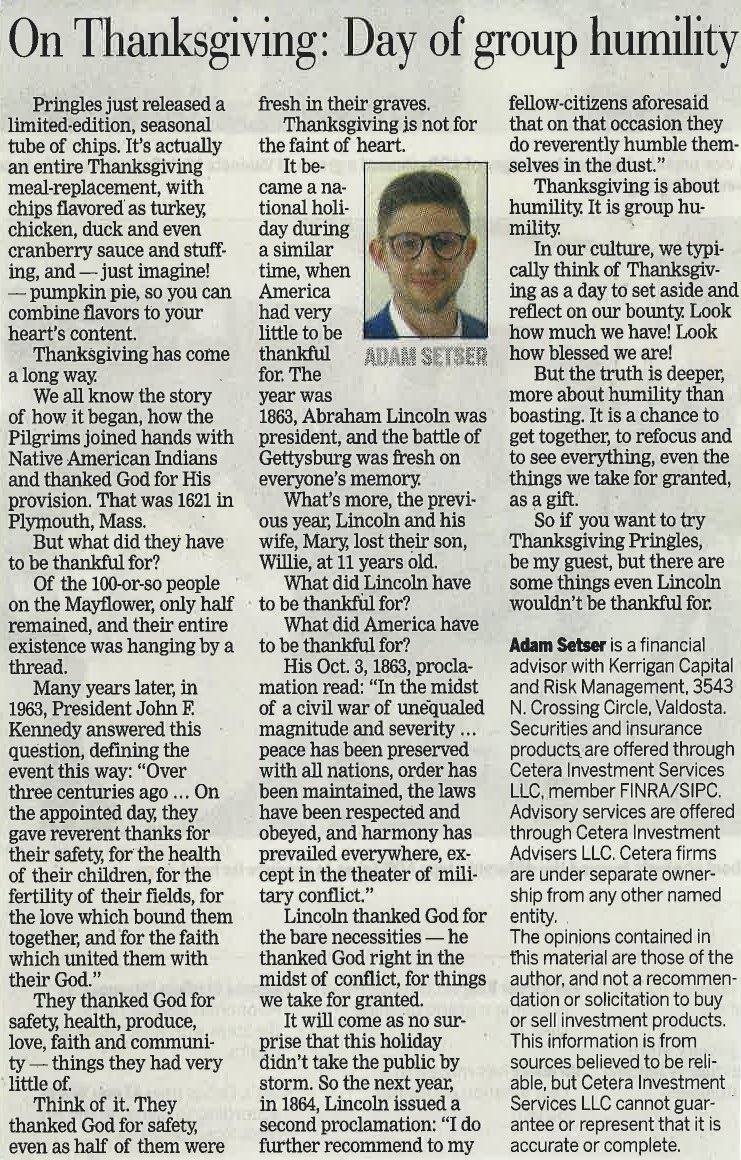 On Thanksgiving: Day of group humility

Pringles just released a limited-edition, seasonal tube of chips. It’s actually an entire Thanksgiving meal-replacement, with chips flavored as turkey, chicken, duck, and even cranberry sauce and stuffing, and—just imagine!—pumpkin pie, so you can combine flavors to your heart’s content.

Thanksgiving has come a long way.

We all know the story of how it began, how the Pilgrims joined hands with Native American Indians and thanked God for His provision. That was 1621 in Plymouth, Massachusetts.

But what did they have to be thankful for?

Of the 100-or-so people on the Mayflower, only half remained, and their entire existence was hanging by a thread.

Many years later, in 1963, President John F. Kennedy answered this question, defining the event this way: "Over three centuries ago…On the appointed day, they gave reverent thanks for their safety, for the health of their children, for the fertility of their fields, for the love which bound them together, and for the faith which united them with their God."

They thanked God for safety, health, produce, love, faith, and community—things they had very little of.

Think of it. They thanked God for safety, even as half of them were fresh in their graves.

Thanksgiving is not for the faint of heart.

It became a national holiday during a similar time, when America had very little to be thankful for. The year was 1863, Abraham Lincoln was president, and the battle of Gettysburg was fresh on everyone’s memory.

What’s more is, the previous year, Lincoln and his wife, Mary, lost their son, Willie, at eleven years old.

What did Lincoln have to be thankful for?

What did America have to be thankful for?

His Oct. 3, 1863, proclamation read: “In the midst of a civil war of unequaled magnitude and severity … peace has been preserved with all nations, order has been maintained, the laws have been respected and obeyed, and harmony has prevailed everywhere, except in the theater of military conflict.”

midst of conflict, for things we take for granted.

It will come as no surprise that this holiday didn’t take the public by storm. So the next year, in 1864, Lincoln issued a second proclamation: “I do further recommend to my fellow-citizens aforesaid that on that occasion they do reverently humble themselves in the dust.”

Thanksgiving is about humility. It is group humility.

In our culture, we typically think of Thanksgiving as a day to set aside and reflect on our bounty. Look how much we have! Look how blessed we are!

But the truth is deeper, more about humility than boasting. It is a chance to get together, to refocus, and to see everything, even the things we take for granted, as a gift.

So if you want to try Thanksgiving Pringles, be my guest, but there are some things even Lincoln wouldn’t be thankful for.

The opinions contained in this material are those of the author, and not a recommendation or solicitation to buy or sell investment products. This information is from sources believed to be reliable, but Cetera Investment Services LLC cannot guarantee or represent that it is accurate or complete.